With a 5 to 4 vote (and a beautiful statement) the USA Supreme Court allows gay marriages in all 50 states:

'No union is more profound than marriage, for it embodies the highest ideals of love, fidelity, devotion, sacrifice, and family. In forming a marital union, two people become something greater than once they were. As some of the petitioners in these cases demonstrate, marriage embodies a love that may endure even past death. It would misunderstand these men and women to say they disrespect the idea of marriage. Their plea is that they do respect it, respect it so deeply that they seek to find its fulfillment for themselves. Their hope is not to be condemned to live in loneliness, excluded from one of civilization’s oldest institutions. They ask for equal dignity in the eyes of the law. The Constitution grants them that right. The judgment of the Court of Appeals for the Sixth Circuit is reversed.

1) Canadian Supreme Court rules (on June 11, 2015) making Medicinal Marijuana legal in all forms and ways of ingesting it (as in cookies, oils, tea, etc.) .

- The Federal Health minister was" outraged' by the Supreme Court ruling and vowed to combat "normalization" of pot.
- In Vancouver police appear to be ignoring the marijuana controversy. Vancouver currently now has more medicinal marijuana outlets than Starbucks coffee outlets.

2) Canadian Federal  Bill C-51 has been passed by the majority government in spite of much opposition. The recently passed Bill C-51 allows for a person to be held in jail  for up to 7 days WITHOUT BEING CHARGED with a crime. All that is required is for there to be suspicion of promoting terrorism (which is not clearly defined - just social media activity is adequate). Unless the person agrees to some 25 conditions including "religious counselling" and wearing an RCMP electronic GPS tracker) he could be kept locked up for up to 12 months.

Winnipeg, Manitoba, is not noted for being a hotbed of terrorism.
However, on June 4th Aaron Driver was arrested and placed in jail.for verbally admitting he supports the Islamic State. He hasn't been charged with a crime, let alone convicted, nor accused of dong anything wrong.
So much for our freedom of speech and legal protest. And what about innocent until proven guilty?

3) Why does the Conservative Federal Government keep introducing bills with no expectation of them ever becoming law because Parliament rises for the summer next week and the "fixed" election date is in October?


ON A HAPPIER NOTE

Canadian sprinter  De Grasse wins NCAA sprint titles.  Andre De Grasse, representing the University of Southern California, produced two of the fastest times in history under any conditions to win the 100m and 200m double at the NCAA Championships in Eugene on Friday (12). His times of  9.75 and 19.58 are not "official records" because he had a wind in his back.

Pope Francis' encyclical on climate change had been leaked but is now released.
Prime Minister Harper's prior 10 minute meeting with the Pope met with with mixed reactions: 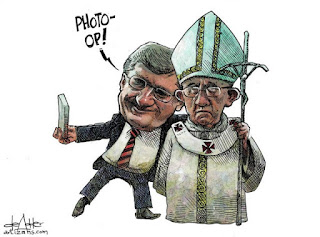 GETTING ALONG IN A CRAZY WORLD

b) The Ultimate in Acceptance

In May of 2015,  two male senior high students who were best friends went to their prom dance together. This has been happening occasionally with two gay young men, but they were both gay.  This is the first I have heard of it with one of them straight and the other gay.

c) Ireland Is The First Country to Vote (May 23rd) on a Referendum on " Gay Marriage". Is this the same as "Same Sex Marriage?" Or is this just a distinction without difference?  Comments are welcome.

The 55,000 members of the Professional Institute of the Public Service of Canada are demanding provisions that would allow scientists to — wait for it! — speak openly about their work, publish results without fear of censorship and travel abroad to collaborate with peers.

The researchers’ union points out that under current plans, more than $2.6 billion and 7,500 positions will be eliminated by 2017 from the top 10 science-based departments and agencies. Meanwhile, some departmental science libraries have been shuttered, with their contents sometimes ending up in dumpsters

A COUPLE OF THINGS YOU DON'T NEED, BUT ARE IMPRESSIVE


SomeThings You DO NOT NEED


1) The Steampunk motorcycle comes with firing machine guns (blanks only).
Great to impress your "anarchist friends".

2) The all-new Toroidion  is the world's most powerful all-electric supercar with a full megawatt (1,341 hp) of power.
To compete in the 24 Hours of Le Mans endurance race of some 3,000 miles (4,830 km),  Toroidion relies on a rapid-swap high-capacity battery that is "as easily replaced in the pit-lane as it is in the home garage."  Distances like that are over 10 times the range of other electric cars like the Tesla Model S and Audi R8 e-tron.

1) Add Wi-Fi  connection to your old computer using a USB dongle available from Amazon.com (under $20).  It is just a tiny little dongle that you plug into a USB port. It has a Wi-Fi radio in it, which your computer can use it to connect to Wi-Fi.

2) Want easy Bluetooth for your old computer with USB dongle?  The HTG Guide to Adding Bluetooth to Your Computer

What You SHOULD KNOW

1)  USA CALLS FOR AN END TO PSYCHIATRIC THERAPIES TO CHANGE SEXUAL ORIENTATION (ALSO CALLED "CONVERSION THERAPY).
President Barack Obama has called for an end to psychiatric therapy treatments seeking to change the sexual orientation or gender identity of gay, lesbian and transgender youth. It comes in response to a petition.

2) Tuesday, April 21, 2015, The Canadian government has indicated it will present a BALANCED  BUDGET (NO YEARLY DEFICIT). Somehow, no one seems concerned that, although this means we will have stopped rushing further into DEBT, we still have a RECORD HIGH DEBT.  As in,   C$ 981,464,208,804  at the time I write this blog and increasing by about $1000 per second. Click to see the DEBT clock.
It is like just borrowing more money from the bank to "balance" your household budget SO YOU CAN KEEP ON SPENDING.  I guess this is why the Government NEVER says the word "debt".
Think about this when you are told how well Canada is doing economically. 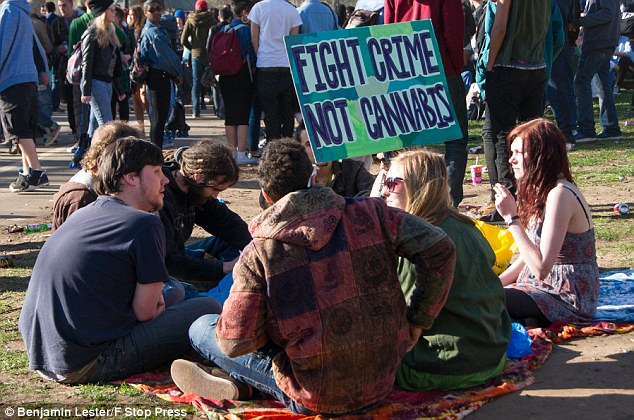 
What You Need To Know Before Flying A Drone

(to stay out of trouble)

(Information from How-to Geek we

(Not as easy as you might think)
This is a problem which men encounter on a daily basis. Relieving himself at a urinal may result in splash-back onto the floor, shoes or trousers. It has been a topic of much consideration from health as well as aesthetic perspectives.


1) University Study on Urine Splash Back

They found that "urine" follows what is known as the Plateau-Rayleigh instability in that a pee stream breaks up into drops before striking something else.
The  splash causes drops to reach as far as the sink in most home bathrooms from the "angle" stream of a standing position.
The solution is simple. Men could just sit to pee and/or pee straight down - an  easy  solution - but somehow not a popular one. In a hi-tech version of the traditional Canadian "write your name in the snow" activity, simple video games have been  developed where the urine stream is used to control a simple video game thus encouraging focusing the stream.
The maker of the system, a UK technology and manufacturing company called Captive Media, says that outside the United States its system has already been installed in bars, hotels, airports. A variety of games are offered, all of which are controlled by the player’s aiming right or left.

Hamburg's St. Pauli neighborhood is regularly victimized by late-night revelers looking to empty their bladders, thereby causing a bad odor and deterioration of the walls. To battle this problem, walls are being covered with a paint that splashes urine back onto perpetrators. This is an unusual use of the Ultra-Ever Dry super-hydrophobic, oleophobic nano-coating paint sold as a general liquid repentant paint for many uses.

ON A MORE SERIOUS NOTE

of another world," said John Callas at  NASA's (JPL).  "A first time happens only once."

(a)  Amazon.com is secretly testing parcel delivery by drones to British Columbia

(b) Canadian Armed Forces plans to buy drones for the Arctic

Canadian Forces (do not) need to buy drones for the Arctic

(a) The Cryptex Drive allows you to lock and secure the16gb USB drive inside. Simply match the pre-set 5 digit code and you’ll be able to remove the drive for use. This may not be the "safest" way to secure your data, but I think it would get the attention of your friends at a reasonable price.

(b) The Apricorn Aegis USB Flash Drives come in 4GB, 8GB, 16GB and 32GB storage. The USB storage units are encrypted with 256-bit AES-CBC technology, FIPS Military Grade Hardware validated and work on PC, MAC and Linux.is available with 16GB, 32GB and 64GB of flash storage.
(c) The SanDisk USB Flash Drive is available with 16GB, 32GB and 64GB of flash storage. The WiFi Connect offers wireless connectivity to other WiFi enabled gadgets and micro SD storage expansion and does not need an internet connection, cables or a router. Free iOs and Android apps allow efficient management of file transfers and connection, including password protection and 128-bit AES encryption.

What Has My Canada Become ???

PLEASE MAKE IT STOP
IT IS AS EASY AS VOTING  ABC

Remember when Canada had a reputation for being polite (to a fault), and the Canadian Flag on your lapel could earn you a smile and friendly wave from strangers overseas? And the Government didn't lie to you ALL the time?

Stephen Harper once told an American right-wing think tank, “You won’t recognize Canada when I get through with it.” I think he has pretty much succeeded in doing just that.
On June 3rd, 2011, Brigette Marcelle, a 21-year-old Senate page, held up a "Stop Harper" sign during the government's throne speech for 20 seconds before being quickly escorted out of the chamber and immediately fired. We should have heeded her advice.

WHAT DOES CANADA HAVE NOW?

1) Thousands of ordinary CANADIANS took to the streets all across CANADA on March 14th to PROTEST the Federal Government's plans to shove Bill C-51 through parliament by the end of March.

Four former prime ministers and numerous knowledgeable professionals have publicly decried this bill as a major step in turning Canada into a police state with a "Secret Service Spy Agency" with no oversight to protect personal freedoms. Click on the C-51 link for a CBC news video explanation.

THIS IS NOT THE CANADA I GREW UP IN

Posted by Unknown at 1:48 PM No comments: